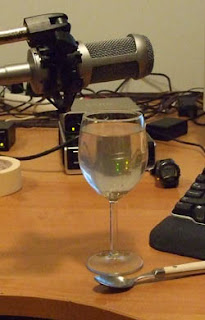 It is one of my oldest sampling projects and one I consider the must successful, sonically. I guess everyone interested in music (or not) has been trying playing glasses as a kid. I have. When I started to play with samplers, I thought of that and I wanted to try to capture that sound. I picked a wineglass, some brown water (which due to some plumbing problem was the only color available at the moment) and a spoon. I tuned the glass carefully adding drops of dirty water with a spoon and took 12 recordings, about 40 seconds each. It sounds rich and organic and it downtunes in a pleasant way, doing well with a lot of reverb. I have been using it for a couple of years, but just recently I took it a step further, creating loop points, so the drone can go on indefinitely. I also created mappings for sfz and Kontakt adding some extra functionality in Kontakt's patch. Here's a little example of solo wineglass:


And another one, solo too, which was the first improvised take on the drone, (there is a little noise when downtuned, which can be heard here):
And here's an example of butchery on Beehtoven's work, which proves the wineglass as fine tool for murdering a classic:

The Wineglass Drone is available at Loot Audio.

The instrument itself is 130MB in 12 wav files, mappings for sfz and Kontakt. You will need full version of Native Instruments Kontakt 4 or newer to open Kontakt mapping. Sfz version is missing GUI and some controllers, it can be opened by various samplers. Loop points are in the files, so it should be easy to load it to any sampler.
Posted by SzcZ at 6:48 PM No comments:

This is the repository of sounds that I created for my music projects: mainly NI Kontakt based instruments, also one shot wav sample sets and sfz sets.

See INDEX for the list of sounds and instruments.

More of my stuff back at
Fairly Confusing Net
+ facebook

Music I was involved in making of: